The delegation of the Ministry of Planning and Investment worked at Long An International Port
Deputy Secretary of the Provincial Party Committee, Chairman of the People’s Committee of Long An province, Nguyen Van Ut proposed to the Ministry of Planning and Investment, considering funding a number of provincial projects such as: Provincial Road 827E, Road Tan Tap – Long Hau, Road Province 830E (from the intersection of Ben Luc expressway to Provincial road 830), the bridge over the Vam Co Tay river, Tan An city (the starting point is Provincial Road 827B and the end point at the round of National Highway 1, Ward 5), Dong An and Tac Can bridge, Tan An city wastewater treatment area, …
Minister of Planning and Investment Nguyen Chi Dung highly appreciated the results that Long An has achieved in recent years. The Minister stressed that Long An absolutely can make a breakthrough and rise up if it knows to grasp opportunities as well as opportunities for development.
Minister Nguyen Chi Dung suggested Long An add Tan Tap – Long Hau road project to the list of ODA loans and will submit to consider and support 120 million USD of ODA capital for Long An to implement projects as proposed.
Long An province has also invested in completing the axis of Provincial Road 830 from the port connecting NH50 and NH1 from Long An International Port to the districts of Can Giuoc, Can Duoc, Ben Luc, Duc Hoa, Duc Hue and most of the industrial zones. in the local area.
In addition, the Ben Luc Long Thanh expressway project (belonging to the North-South expressway) will open traffic by the end of 2020, connecting 4.89 km of the expressway through Long An province in the two districts of Ben Luc and Can Giuoc to help deliver through the Western region and the Southeast region, there is no need to transit through Ho Chi Minh City.
The route will connect directly to the expressway network – national highway, seaport system with Long Thanh international airport, at the same time, contribute to reducing traffic pressure on NH1, NH51, shortening the travel time from the province. Long An to HCMC, Dong Nai, Ba Ria – Vung Tau.
Long An International Port was officially built in 2015, located in a complex of 04 project areas with a total scale of 1,935 ha, including: Long An International Port; Dong Nam A Long An Industrial Park; Southeast Asia Industrial Service Area Long An; Long An Southeast Asia Urban Area.
In which, Long An Port has an area of 147 hectares, is invested and built into 3 phases with a total capital of nearly 10,000 billion VND, including: 7 berths capable of receiving ships up to 70,000 DWT with a total length from the beginning of Pier 1 to the end of Pier 7 is: 1,670m; Including 07 barge berths; Warehouse system, bonded warehouse; Container yard system and other ancillary works.
All items as well as the operating center system are being promptly constructed and built on schedule, completed by 2023.
Particularly, the storage area at the port is more than 400,000 m2, serving the transportation and storage needs of agricultural, aquatic products, fertilizers, iron and steel … of the Mekong Delta region and is a gateway for businesses. import and export industry in the Southeast region, gathering, packing and distributing goods by land, sea or inland waterways. 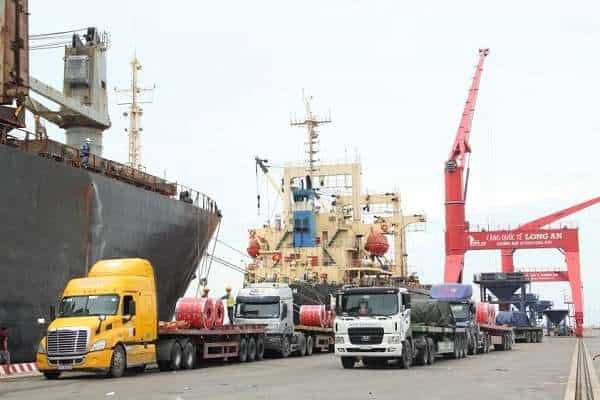 Up to now, Long An International Port has officially inaugurated phase 1 with 3 berths with length of 630m, the 4th, 5th and 6th berth are under construction to accommodate ships with tonnage. up to 70,000 DWT is expected to be operational by the end of 2021.
In addition, the investor is also promoting the completion of legal procedures to expand the scale, so that the No. 8 & 9 berths with a design capacity can accommodate ships up to 100,000 DWT; bringing the total continuous length of the wharf system up to 2,368 m, becoming one of the international berths with the largest port length in Vietnam today.
With the scale of cargo throughput capacity of about 80 million tons / year. It can be said that the development of Long An International Port is the premise to strongly promote the development of industrial zones and clusters, contributing to regional economic development. At the same time, reducing road traffic congestion, reducing transportation and logistics costs for businesses to invest, is highly appreciated by businesses located in Long An province in particular and the Mekong Delta in general. ./.
https://baodautu.vn/ 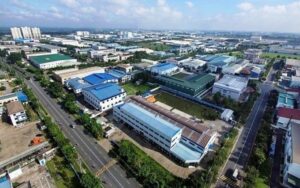